Tony Deyal | Who let the Gates out? 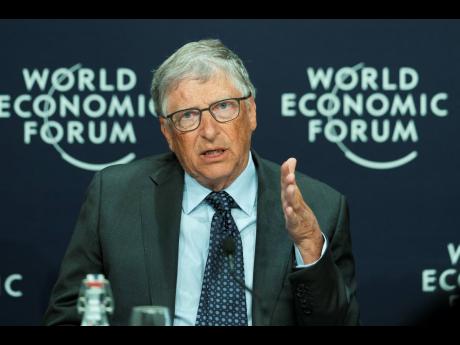 American journalist Max Lerner might have been writing this specifically for the present prime minister of Trinidad and Tobago (PMOTT), Keith Rowley, “The politics of surprise leads through the Gates of Astonishment into the Kingdom of Hope.” In...

American journalist Max Lerner might have been writing this specifically for the present prime minister of Trinidad and Tobago (PMOTT), Keith Rowley, “The politics of surprise leads through the Gates of Astonishment into the Kingdom of Hope.” In this case, and his haste, the Gates were Bill and Melinda and the astonishment came when the PMOTT’s kingdom of hope was more like Bob Hope the comedian, or the Cape of Good Hope, known as one of the world’s most treacherous ship graveyards. If Hope springs eternal in the human breast, the PMOTT’s boob must be bigger than the 36C of Heidi Klum and, as one of my colleagues called me and quipped, “Given the gargantuan mistake he made, the PMOTT must be wishing he could Heidi self until the jokes get deflated and he stop feeling like Cameron Diaz.”

I had promised some of my friends that today’s column would be about whiskey and its benefits, but knowing that the Gates of hell, heaven or Microsoft are paved with good intentions, I decided to scotch my plans and check the day the PMOTT got taken for a ride. I discovered that it was not in the fast ferry to Tobago, the more costly Caribbean Airlines to New York, or even a bumpy elevator that let him down. None is as fast, furious and foolish as what he did to himself. If any bigwig fell as fast on his face as the PMOTT did, it had to be Congressman Anthony Weiner who was caught sending explicit texts using the alias ‘Carlos Danger’.

Unfortunately, the PMOTT did not seem to have foreseen, predicted or done the ‘due-diligence’ to ascertain that what he thought was light at the end of the financial tunnel, caused by COVID-19 and his management, was what has to be the fastest train in the world, a veritable Shanghai Maglev, coming to bounce him out of his unfortunate boast carried in the Trinidad Guardian on Monday, May 23. The newspaper headline read, ‘T&T to get ‘significant’ funding from Bill Gates Foundation’ and was followed by, “Prime Minister Dr Keith Rowley has announced that Trinidad and Tobago has been chosen to receive funding from the Bill and Melinda Gates Foundation, which he described as ‘not-insignificant’.” It continued, quoting the PMOTT, “Today, I have been advised that we are lucky to be identified for a not-insignificant share of some funding to be made available from the Bill Gates Foundation. I spoke to the Secretary-General of the United Nations who has identified us for that gift that we will accept and put to good use in T&T.”

The gates to Gates might be paved with good inventions but not this time. Previously, the jokes have been an open floodgate drowning the ‘Gateses’. For example, “What did Bill Gates wife say to him on their wedding night?” “So that’s why you call it ‘Microsoft’!” Gates assured Melinda, “I’ll never cheat on you again. I give my Word.” And recently, “Did you hear about the Bill Gates divorce?” Melinda kept the house and Bill got all the windows. Unfortunately, he did better than the PMOTT, who ended up with nothing but jokes at his expense and being laughed at by Trinis who, when the results are out for the daily national betting game of whe-whe, say, “the mark buss”, meaning the ‘git’ hit the fan. This Monday, May 23, the Daily Express posted as its top story, “The Bill and Melinda Gates poverty grant to T&T was a trick.”

The use of the word “trick” stunned me. I would have used “hoax” or even “swindle”, “scam”, “ruse”, “ploy”, “scheme” or just plain “lie”. Why? You have to be careful with “trick” since, especially in the US and Britain, most people know that it is linked to prostitutes and, when any of the ladies of the night engage in a sexual act with a customer, it is called a ‘trick’. To “turn a trick” is common slang for the act of sex-for-pay. The ‘trick’ could also be the person paying for such pleasures. So, unfortunately, the word can mean not just that the ‘trick’ was pulled on the PMOTT but it was done by the PMOTT himself in some kind of self-flagellation. Clearly, we don’t want the reputation of our illustrious leader to be sullied in such a manner, regardless of his being so completely fooled by such a transparent gambit. For everybody’s enlightenment, ‘trique’ was a word used to denote a wooden stick or a tool used to help motivate donkeys pulling carts to get a move on. But a ‘triquer’ was the word for erection. For those who are sorry for what the PMOTT got himself into and his response to when he found out he was taken for a ride, the English and French words for the opposite of erection are almost the same, ‘deflation’ and ‘déflation’. That was evident in the fact that the PMOTT did not go on television as he normally does, and actually did when he thought he had great news, but this time he sent out a statement through his office.

This is one time the PMOTT could not blame the Opposition leader who went to town on his faux pas. Instead, he explained that the chairman of the Caribbean Community (CARICOM) phoned him with the news that the Office of the Secretary General (SG) of the UN wanted to reach him and a few other CARICOM leaders to let them know they had received a substantial grant from the Bill and Melinda Gates Foundation …. He could not get through to the SG and instead got “a person purporting to be the SG” who attempted to encourage him to use a foreign bank to receive this grant but at a significant processing fee. The PMOTT insisted that “having requested and not receiving any documentation and being contacted in a familiarity not normally associated with the Office of the SG” he was “now convinced that this was a most brazen scam being run in the shocking manner as described”. It might be the pressure of his office or the jokes made by his political opponents who he cannot blame for his error, but the PMOTT has not yet officially reported the matter to the police.

It is possible that the PMOTT wants the matter to go away as quickly as possible. In my 30 years of moving around the Caribbean, this is the first time I’ve seen a prime minister get himself into such a fix. Worse, it has happened at a time when the prime minister of Barbados has made it into the Time 100 ‘Influential Leaders’ list. As far as I know, she is the first and only one so far! A former head of CARICOM once told me about another T&T prime minister that he and the other prime ministers nicknamed ‘Arneau’ because anything they mentioned to him, his replay was always “Ah know”. What would they call this one? “Ah don’t know?” Or would he say, like one of his ministers, “I am not God.”

Tony Deyal was last seen asking “What do you call a prime minister when he enters Parliament?” An inside joke. And “What do you say when he gets angry and starts to roar, quarrel and threaten?” The Joker Is Wild. Send feedback to columns@gleanerjm.com