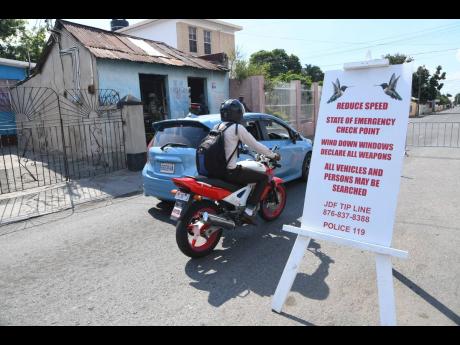 File
A cyclist rides by a checkpoint along Chisholm Avenue in St Andrew during a state of emergency declared in 2020. 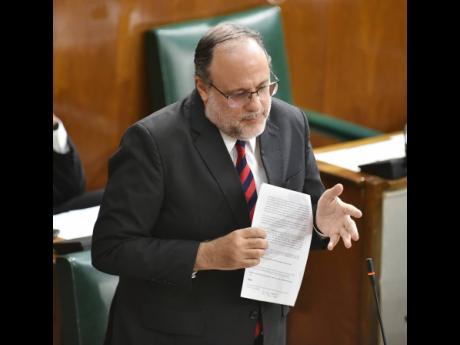 Mark Golding’s exhumation of a proposal allowing for relatively lengthy precharge detention in Jamaica is a good starting point for discussions between the Government and the Opposition over the conundrum in which the Holness administration finds itself for its use of states of emergency (SOEs) as its main crime-fighting tool.

Of course, there is already quibbling over paternity of the idea. The Government accuses Mr Golding of reclaiming a proposal from 2019 deliberations. The Opposition argues that it is significantly enhanced.

While there are substantial differences between Mr Golding’s proposal and the 2010 amendments to the Bail Act, which the courts held to be unconstitutional, there are still likely to be questions of whether the Opposition leader’s recommendation can be implemented by a regular act of Parliament, or would require adjustments to the Constitution to define what, for a person detained under the special provision, would be “as soon as is reasonably practicable” to be taken before a court to seek bail.

Faced with more than 1,400 murders a year and a homicide rate approaching 50 per 100,000, the Government, since 2018 (initially with the grudging support of the Opposition), has largely relied on SOEs to deal with the crisis. However, emergency powers can only be imposed for two weeks before they lapse, unless continued by a two-thirds vote in both Houses of Parliament.

Given the constitutional configuration of the Senate, it means that even an administration with a big majority in the House of Representatives needs the vote of at least one opposition senator for the measure to prevail. In recent SOEs, including the one that collapsed this week, Mr Golding’s People’s National Party (PNP) has withheld its support, despite pressure from the island’s private sector for it to back the measures.

However, endorsement of the Government’s states of emergency, which give the security forces wide powers to detain people and to hold them for significant periods without having to take them to court, is not universal. Human-rights advocates and others have, like the Opposition, chafed at the possibility of infringing on people’s rights. Critics have been buoyed by two court rulings that regulations governing past SOEs were unconstitutional. The judgments included a determination that powers granted to the national security minister to decide on the detention of people encroached on the separation of powers and the authority of judges.

Further, opponents of the current use of SOEs argue that it encourages lazy policing, by allowing a constabulary that is often accused of incompetence and corruption, to engage in trawling expeditions against young men in communities, rather than targeted investigation, arrest and prosecution of criminals. That approach puts at risk the rights of all Jamaicans, while removing the incentive for fundamental reform of the constabulary, they say.

Nonetheless, Mr Golding, the PNP president, concedes that in Jamaica’s situation, a level of precharge detention would be useful. It would give the police time to try to convert intelligence into the kind of evidence that can be adduced in court.

His proposal is for the police to be allowed to receive ex parte orders from judges, on the basis of supporting affidavits outlining credible intelligence, to detain suspects for an initial seven days. Thereafter, these orders could be for another 42 days, at 14-day intervals. During this time, the law enforcement officers would have to explain to judges the progress of their investigations and why the detentions should continue. Arrested persons could challenge their detention.

Mr Golding’s proposal is different to the 2010 bail amendments which, among other things:

– Shifted the burden of proof for entitlement to bail to the accused person rather than the State.

– Set a minimum 60 days before bail for persons charged with specified crimes, including murder, although these accused persons had to be brought to court seven days after being charged, and at 14-day intervals thereafter. On the face of it, the court could not grant bail until the 60 days have elapsed.

– Gave the prosecution the right to appeal the award of bail.

Mr Golding’s proposal is broadly consistent with what obtains in Britain’s Terrorism Act, under which a suspect can be detained for up to 28 days without being charged. However, after the first 48 hours, prosecutors have to apply to a magistrate for an extension. Any application for detention beyond 14 days has to be made to a High Court judge.

The Opposition leader’s suggestion for the appointment of a special case management judge to handle these proceedings should perhaps be upgraded to a system roughly analogous to America’s FISA (Foreign Intelligence Surveillance Act) Court, which hears applications and grants approvals for the electronic surveillance of suspected spies.

In any event, there is now an opening to get past the politicking over SOEs and to talk seriously about how to manage crime, while protecting the constitutionally protected rights of citizens.