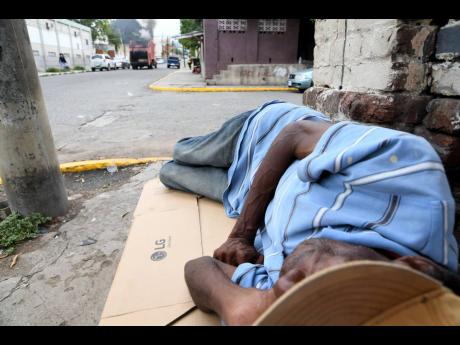 File
A homeless man uses a flattened cardboard box as a bed to sleep on a sidewalk in downtown Kingston.

The recent gone-viral video of a licensed firearm holder pulling a gun on a woman, supposed to be homeless, in New Kingston, has brought to the fore one issue that we can’t ignore for much longer – the dangers associated with homelessness in Jamaica, both to the society and to the homeless themselves.

Homelessness poses a real threat to an individual’s safety and health. Homeless population suffers from a significantly higher mortality rate than people who are housed and it’s not hard to see why. Living on Jamaican roads is a life-threatening ordeal when you are invisible to speeding motorists and when idle and unprincipled children find entertainment in throwing stones at you and inflicting harm on you in other puerile and depraved ways.

This might be a good opportunity to offer the reminder that just a few weeks ago, five teens were charged with murder for allegedly dousing a 48-year-old homeless man with gasoline and setting him ablaze.

As if a life of such vulnerability isn’t hard enough, much of the homeless population is forced to get by begging for money and thereby become an annoyance to persons who just don’t want to interact with them. Not everyone handles feelings of annoyance very well, and this puts the beggar at heightened risk of harm or just general ostracism.

To be without a home also means you are left to the mercy of the elements during inclement weather and at nights when it is cold, which further increases the likelihood of your ill-health. And, without medical care, the mildest of sicknesses can easily become a death sentence.

Jamaicans can also attest to the fact that a not-so-uncommon characteristic of the beggars on our roads is a swollen leg, a bandaged arm or some other evidence of injury. When a disgruntled motorist runs over your foot and you have no access to medical care, you are almost bound to be left with a lifelong injury or deformity.

And then, a significant proportion of our homeless population is characterised by a distinct trait. There’s no use discussing homelessness without discussing the issue of mental ill-health, since so many homeless persons suffer from mental illness. “Homeless” in Jamaica does not always mean “without a home”. Many homeless persons who are mentally ill actually have homes and are blissfully unaware of it, because of their mental state. They have families that have given up trying to keep them connected to psychiatric care and as a result are left wandering around nomadically to do literally whatever.

Of the over 2,000 vagrants on the island, it is estimated that roughly 49 per cent experience some mental illness. This should give context to the fact that many homeless persons exhibit pretty intimidating and unpredictable behaviour and do pose a risk on the roads as well.

One case which almost comprehensively highlights the dangers imposed on and imposed by unsupervised mentally ill persons, is an incident which occurred last year. In the early hours one morning in October, two homeless men, thought to be of unsound mind, got into an altercation. One beheaded the other. When police arrived on the scene of the incident, the perpetrator is alleged to have attacked the police and was consequently shot and killed. Unfortunately, two lives were lost, simply because two mentally ill persons were left, again, to do literally whatever.

The good news is that mentally ill persons can be helped and can be rehabilitated. The bad news is that we already know that and yet have not done nearly enough to change the status quo. This is not to say that we haven’t put in place a great deal of resources to cater to unhoused persons and, specifically, those who are mentally ill. The Bellevue Hospital, for example, has been providing psychiatric care for adult Jamaicans, free of cost. Other Jamaican hospitals provide psychiatric services as well.

The issue seems to lie in our inability to bridge the gap between the mentally challenged man or woman on the street and the help available to him or her. People who are mentally unwell sometimes don’t know that they are mentally unwell and will not go in search of help. So, any initiative put in place to provide mental healthcare services should operate on the assumption that those in need of help aren’t likely to show up knocking on the door.

One mark of a truly civilised society is its willingness and ability to care for its most vulnerable. But aside from a general sense of moral duty or obligation, the incentive for prioritising the rehabilitation of mentally ill persons, if no other, might be that they all have a contribution they can make to society. Many would have been fully functional people at some point, with families, jobs and a home. They simply need to be rerouted back to their lives, pre-sickness.

Mental illness is a threat to everyone. Unfortunately, we have been cultured to see the ‘mad man’ on the road as being a little less human. However, there comes a point at which culture must be superseded by common sense and public policy. On almost every thoroughfare in Kingston sits at least one known beggar. Again, many of these beggars are not in their right mind. At what point do we take action to get help for those who can’t help themselves?