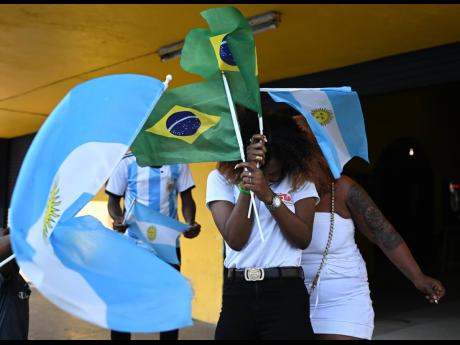 Gladstone Taylor
A Brazil supporter is sandwiched between two Argentina supporters during the Argentina vs Poland FIFA World Cup match on November 30.

During the 1970 World Cup Football Finals (won by a Brazilian team led by the one true G.O.A.T.), dominoes were played only on “rest days”.

Only 16 nations qualified in 1970, so there were rest days even during the group stages. But adjustments had to be made to our domino schedule so that we gathered on Thursday evening, June 4, immediately after Brazil played its first game against Czechoslovakia (more than 22 years before it separated into Czech Republic and Slovakia).

Dessie and the Dunce came from a big football family (schoolboy football “stars” among four sons) so were huge Brazil fans. The Dunce began with “Yu see what happen yesterday?”

For those who came in late, Ernest H. Flower, a regular kibitzer at our domino games, was a lazy articled clerk whose nickname stuck because he incessantly complained about “piles and piles” of files on his desk. He was a shaggy dog storyteller of the highest quality, so we allowed him to visit our games despite his complete lack of domino knowledge.

Haemorrhoid asked for a time-out to tell the story of the naïve wife. Readers should know that a shaggy dog tale takes a long and winding, often tortuous, route through many unnecessarily annoying details before ending with a monumental anti-climax. This means that I must do some severe editing in order to at least partially replicate some of Haemorrhoid‘s gems.

“A young wife named Aggie noticed a certain discomfort below her belly-button accompanied with difficulty in passing water (gotta be careful in a family newspaper). Believing this meant that she was ‘expecting’ (remember, family newspaper, can’t say “pregnant”) she visited her general practitioner, who reported that she was not.

Eventually [lots of editing here to shorten her numerous visits to different specialists] s he was referred to an obstetrician/gynaecologist named Abe.

Abe did all the required tests [trust me, you don’t want the details], and after a few days, told Aggie that she had a sexually transmitted disease. She was aghast. ‘That’s impossible!’ Aggie exclaimed.

Abe was as gentle as he could be in the circumstances: ‘Surely you must have experienced intimate relations with, er, um, your husband (that last quizzically) recently?’

‘Well,’ Aggie replied sounding somewhat offended, ‘Yes, but I can assure you that both I and my husband are unfailingly monotonous.’”

Haemorrhoid took some time to get up from the floor where he spent a full minute rolling around with laughter at his own joke before warning the Dunce against abuse of the language especially when speaking about intimate relationships.

The Dunce replied as eruditely as he could: “If a macca mek it jook yu!”

Haemorrhoid told the Dunce there’s no more intimate relationship than the one between a male sports fan (women tend to be more pragmatic) and his favourite team. That relationship is almost always monogamous and never “monotonous”. Men remain faithful to their choice team until death do they part. But unlike marriage or family or national relationships, the two are not joined by any bond that could support the persistent, exasperating misuse of the word “we” to refer to a preferred sports team.

In Jamaica, where WE are in need of almost medical intervention to cut the umbilical cord with colonisers, the only “we” any of us should be referencing is a local sports team (for me that would be Boys’ Town football or Melbourne cricket); the Sunshine Girlz; the Reggae Boyz/Girlz et al. I’m tired of hearing Jamaicans, including my Fred MacMurrayian reproductions, referring to English Premier League teams and other countries’ national teams as “we”.

Not one single member of any of these teams (including those with Jamaican ties or heritage) refers to a single Jamaican team as “we”. And don’t get me started on the flying/printing of other nations’ flags on cars, homes, and on clothing. Please stop. It’s an insult to Jamaica and one of the symptoms of a sel- esteem-destroying disease called mental slavery. That disease keeps us embracing a foreign monarch as “ours” and a court staffed by our imperial colonisers as a Jamaican court.

Gordon Robinson is an attorney-at-law. Send feedback to columns@gleanerjm.com.