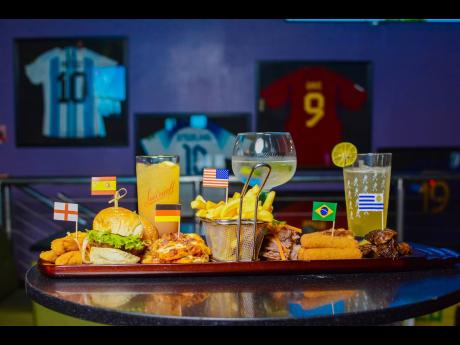 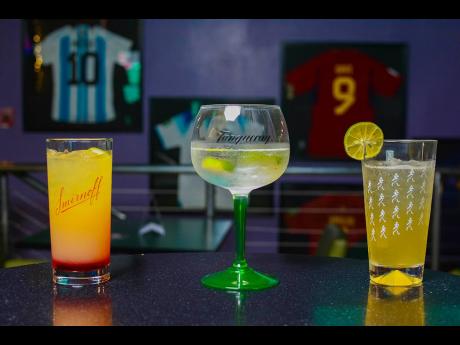 Contributed
From left: The Tanqueray and gin cocktail; Smirnoff Vodka and Schweppes and Johnnie Walker with ginger ale. 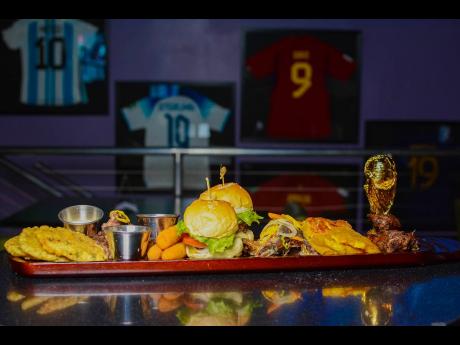 Contributed
Above: The vibes of the Bellyful platta include a hefty serving of a variety of dishes including jerked chicken wings, jerked pork, sprat, two beef sliders, pressed green plantains, fritters, mozzarella sticks and a mac and cheese pie. 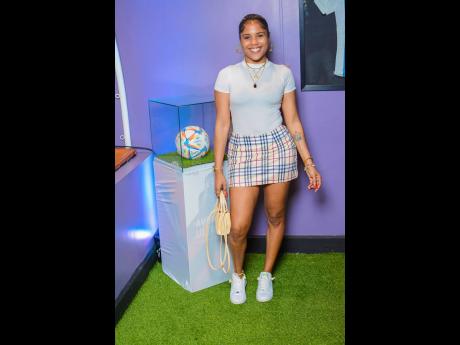 Contributed
Recording artiste, the beautiful Denyque, shows her support in chic fashion at the launch of UBTR Ballaz Hub on Sunday. Contributed 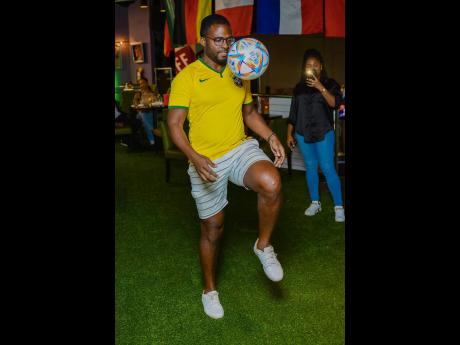 Contributed
Juggling competition winner, Shaun Myers, puts in his skills on display for spectators to see. 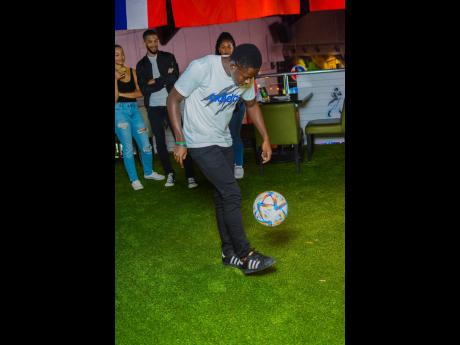 Contributed
Guests look on as Oblique Seville juggles a football during the UBTR Ballaz hub kick-off.
1
2
3
4
5
6

A great sense of togetherness comes with watching the World Cup. And what is a gathering without snacks? If you’re getting the munchies throughout the rounds and seeking somewhere to view the exciting matches, Usain Bolt’s Tracks and Records (UBTR) has already kicked off the season with ‘platta’ and bucket deals.

“UBTR is the home of sports. Our brand ambassador, Usain Bolt, is a sports enthusiast. He loves track and field, football, [and] basketball, you name it. So it was paramount that Tracks & Record be at the forefront of the World Cup as a watch zone. We have 32 screens within the space,” Angiel Shaw, group marketing manager of the KLE Group, parent company of UBTR, told Food.

According to Shaw, two delicious platters are currently dedicated to the football line-up: the World Platta and Bellyful Platta. The top 10 World Cup teams inspired the World Platta. “We took elements of their culture that they are known for. So, for example, Italy is known for pasta and Brazil is known for cheese and beef. So we did a lot of research. The fish and chips represents England. The bread is a southwestern flatbread with steak, and that is in honour of Argentina. So it’s really the flavours of the top 10 teams on one platter,” shared Shaw.

When it came to the bellyful aspect of the menu, that offering is geared at satisfyinatg appetites with a compilation of some of Jamaica’s favourites. It includes a hefty serving of various dishes during match time such as jerked chicken wings, jerked pork, sprat, two beef sliders, pressed green plantains, fritters, mozzarella sticks, and a mac and cheese pie.

Since launching on November 20, the first day of the World Cup, Shaw shared that the response to the deals has been phenomenal. People love them, she said. Many remain loyal to the World Platta, honouring their team of choice. And then other foodies are already raving over the winning sprat on the Bellyful side.

Additionally, there is a Mixed Brew Bucket for drinking pleasures, which comprises three Red Stripes, two Heinekens, and a Guinness. “For match days, we open at 10:30 a.m., and we show mostly the 11 a.m. and 2 p.m. matches. As it goes into the semis and the finals, we will start to show the earlier matches as well,” she said.

To elevate the viewing experience, UBTR has transformed the upstairs of the Kingston restaurant into a footballer fan’s paradise, recreating an entire football field decked with all the teams’ flags and jerseys. The renovated space has officially been dubbed the Ballaz Hub.

“We hope to see everybody coming out. We are a passionate nation, and already, the World Cup has been shaping up to be an unpredictable one. So we are excited to see what is to come. And we would love to share that excitement with our patrons and deliver the best service possible,” Shaw added.

The platters will be available until December 18 at both the Kingston and Montego Bay locations.