$1b for police motorbikes, supplies 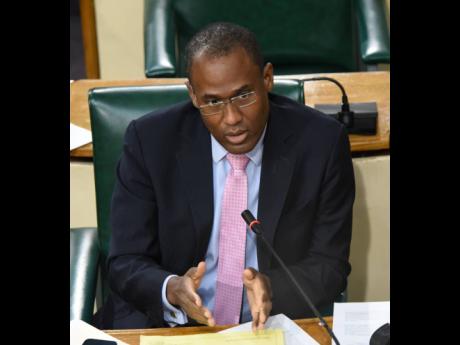 Ian Allen/Photographer
Dr Nigel Clarke, minister of finance and the public service, addresses lawmakers during a review of the second Supplementary Estimates of Expenditure in the House of Representatives on Thursday.

As Jamaica grapples with the soaring homicide rate, Dr Nigel Clarke, the minister of finance and the public service, announced on Thursday that the Government has allocated $1 billion in the Second Supplementary Estimates of Expenditure to acquire motorbikes, armoured vests, and other equipment over the next 10 weeks.

The motorbikes will help to increase the mobility of the police force as it tackles the scourge of crime across the country.

The finance minister noted that while overall levels of crime are down, the rate of murder is up and “the depravity and brutality” associated with them are a deep source of concern to Jamaicans.

“It’s a complex and challenging problem that has been with us for far too long,” Clarke said.

The finance minister was debating the Second Supplementary Estimates of Expenditure on Thursday in which lawmakers approved an additional $25.8 billion in spending for the balance of the fiscal year, which ends in March.

While mentioning the overtime wage dispute between the Government and the police now before the courts, Clarke said he would not elaborate on the issue but noted that it predated the current administration.

However, Clarke said that the Government was looking forward to engaging the police on the compensation review starting in April.

“The police represent the backbone of Jamaica’s domestic security. They are the vanguards who are on the front line of a very difficult challenge,” he said.

The Second Supplementary Estimates will increase government spending from $867.3 billion to $893.05 billion for the current fiscal year.