Subpoena warning for Clarke, others in Alliance crime case 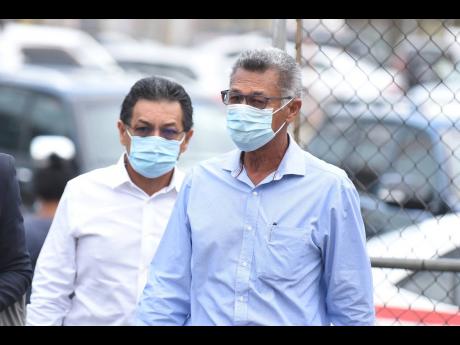 Alliance Finance Limited, which is also represented by Tavares-Finson, pleaded guilty to 34 counts of financial crimes in the Kingston and St Andrew Parish Court. Sentencing has been set for March 3.

At Thursday’s hearing, Robert Chin, one of the principals of Alliance Finance Limited, entered the plea on the company’s behalf.

He, along with Peter Chin, was charged with conducting foreign-currency lending without being an authorised dealer. The allegations related to more than 20 foreign-currency loans, totalling approximately US$8 million, to various entities.

The Chins are jointly charged for alleged breaches of the Banking Services Act for accepting deposits without the requisite licence from the Bank of Jamaica (BOJ) relating to a series of deposits in excess of US$7.5 million over the period 2014 to 2017.

Additionally, Alliance Investments was charged with failure to file threshold transaction reports as mandated under the Proceeds of Crime Act (POCA) for transactions of, or exceeding, US$15,000 (or its equivalent in any other currency) to the Financial Investigations Division (FID).

The matter against the Chins, in their individual capacity, will also be mentioned on March 3.

The senior judge amusingly told Tavares-Finson that those men are not citizens who would generally visit 144 Maxfield Avenue, the court’s address, and later asked if he wished to stand down on the subpoena matter until the sentencing date for Alliance on March 3.

Tavares-Finson yielded to the suggestion of the senior judge but not before declaring, “Maybe they need to learn where it is because neither are Mr Robert and Peter Chin accustomed to coming here either … . I believe that Mr Clarke, Byles, and Haye need to appear in these courts with respect to the sentencing. That’s my application.”

It was also disclosed on Thursday that a plea agreement was entered by the defence that could see the charges against the accused men, in their personal capacity, dropped at the next hearing.

“I have often said and wondered to myself how many times have I entered into a plea deal, pleaded, and got no deal. In this particular instance, after lengthy negotiations, part of the arrangement is that the charges against Peter and Robert Chin in their individual capacity will be discontinued,” Tavares-Finson said.

A plea and case management date is to be agreed on between the prosecution and the defence in relation to the POCA charge against Alliance Investment Management.

Tavares-Finson said that the defence has records to prove that the reports were, in fact, made, notwithstanding a dispute over a seven-year window.