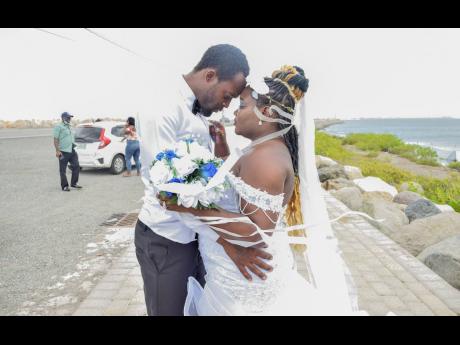 Shot by Matt
In the midst of chaos and uncertainty, love and happiness has taken permanent residence. 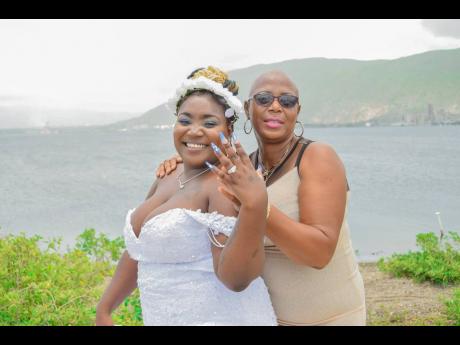 Shot by Matt
Samantha shares a happy moment as a bride with her Godmother Sandy Williams. 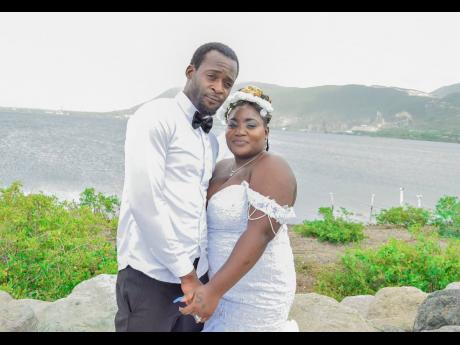 Shot by Matt
Jervon and Samantha went from telephone love to true love. 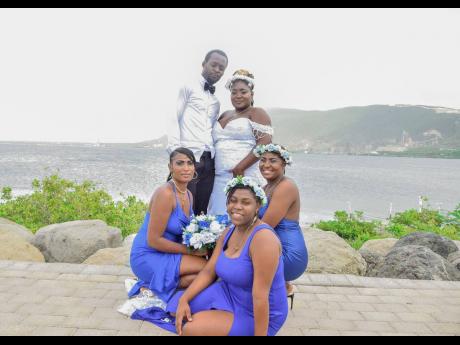 Shot by Matt
The Blakes are joined in photo by (from left) maid of honour, Cadine Sinclair, and bridesmaids Tejana Ashman and Cathtonia Betty all dressed in royal blue. 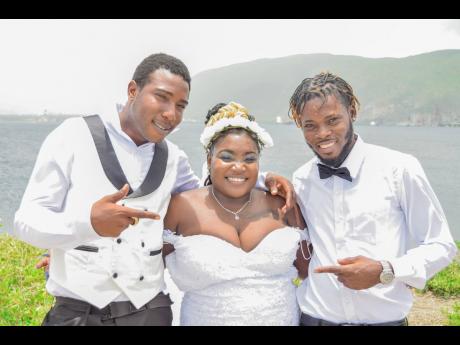 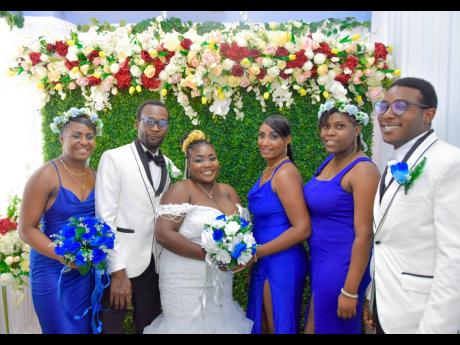 Shot by Matt
Mr and Mrs Blake were excited to have the support of their bridal party. 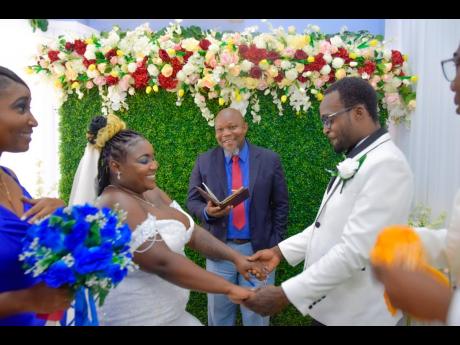 Shot by Matt
The blushing bride held on to her loving groom as they exchanged vows on their wedding day. 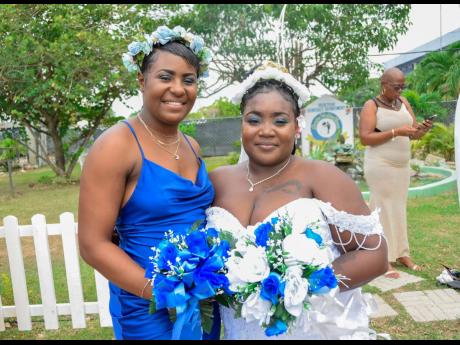 Shot by Matt
Samantha, who now goes by the title Mrs Blake, is photographed alongside her bridesmaid, Cathtonia Betty.
1
2
3
4
5
6
7
8

True love was certainly an endless phone call for Samantha Stewart and Jervon Blake. The pair were mere strangers at the time when they first laid eyes on each other via video, just days before Christmas in 2020. It was there that they learned that they shared a mutual friend. The vision of merriment and enchantment was clear, so they built on their unique chemistry, going the distance to meet each other in person two months later. Sparks flew, and the rest was happily ever after.

Jervon told Island Wedding, “I was talking to my best friend over the phone when I heard her voice and asked him who that was.” Samantha was good friends with the girlfriend of the best friend and just happened to be visiting that day. “All I knew was I wanted to get to know this girl more and find out what she is about. She intrigued me. I wanted an instant relationship, but we decided after about two to three weeks,” he added.

They got acquainted with each other in a long-distance relationship, video-calling day and night until it was time to celebrate his birthday. Samantha decided to give her beloved a real treat. “His birthday is February 28, so I surprised him in 2021 with a ticket to Jamaica on the 26th of that month,” she shared.

Since then, she has found him to be strong, ambitious, caring, and kind. “He is super handsome, stable, and family-oriented. He is always by her side, even if he wasn’t able to be there physically. “He also helped me to believe in myself and not focus on what people had to say. And he has protected me, even when I was in the wrong. He still cares about everything I do or say, and he never disappoints.”

Describing her as a handful, Jervon is happy to report that she still intrigues him to this very day. “She is very protective, kind and so beautiful. There is so much I can say about her. She taught me how to save and know how to flip a dollar into a thousand dollars. Since the moment I met her, she has cared for me in every aspect of my life and I am grateful for her,” he revealed.

Because he resides overseas, they weren’t able to date as often as they would have liked. But on his visits, they venture into the great outdoors, exploring rivers and beaches. They also carve out time for family, creating new ideas and joint business ventures as well as helping others.

While he knew she was the one when she presented him with a trip that changed his life for the better, Samantha’s epiphany came after they faced a traumatic experience together. “I realised he was the one for me after I lost our first set of twins. He dropped everything and came to Jamaica to make sure I’m fine.”

After dating for one year and four months, they returned to the medium through which they connected in the first place to propose a relationship upgrade. “Honestly, I just called her one day and told her over the phone we’re getting married,” he said.

The bride-to-be and her best friend went into wedding-planner mode. And although the process was strenuous, it was definitely worth it. “The first date was set for April 13, but we had to push it back.” As for the dress, she said yes to a nuptial selection from Union Bridal Boutique. “I was scrolling through Instagram and saw the dress that I wanted.”

On August 10, Samantha and Jervon became husband and wife. The couple tied the knot at the Registrar General Department before carrying the celebration to 876 Terrace Bar and Grill for the reception. “The wedding was lovely, filled with laughter and love. It was more than I hoped for,” Mrs Blake reflected.

The groom confessed that he initially viewed weddings as a boring experience, but all this changed when he said “I do”. In the series of events leading up to holy matrimony, the bridal van’s tyre got punctured and she had to be rescued by her groom and his groomsmen. That ended up being the best moment for the her because it added spontaneity and excitement to the special occasion. “When he called and said where I was, I told him what happened with the tyre and in less than 10 minutes, the groomsmen were there to the rescue.”

He concurred that this incident was the highlight of his wedding because he kept his promise of being there for her. “When she reached, it was late and she was crying, thinking the time passed. But I wiped her tears and reassured her that everything would be all right.”