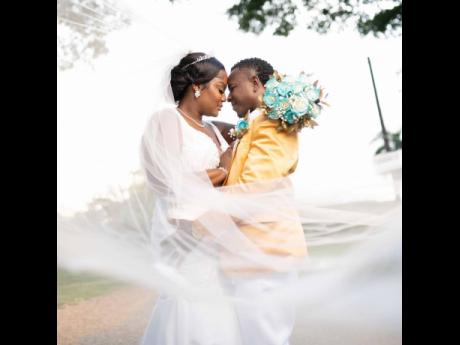 Contributed
The newly-wedded couple were almost lost to the camera, as they stared in each other’s eyes. 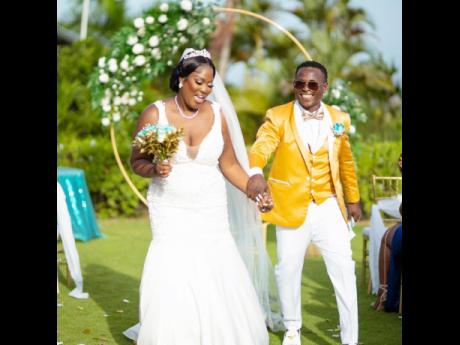 Contributed
The newly-wedded Mr and Mrs Thomas take their first steps as man and wife. 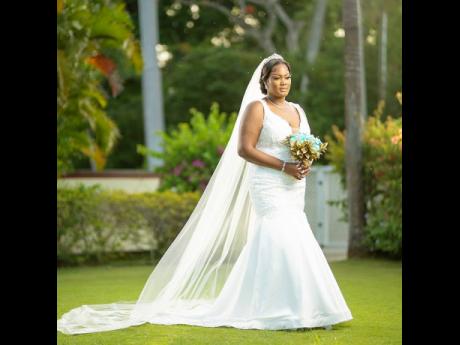 Contributed
Walking down the grassy aisle, Venetia Shepherd was in a positive yet pensive mood as she prepared to become Mrs Thomas. 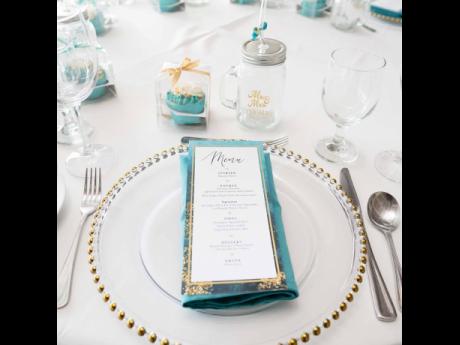 Contributed
The wedding tablescape took on a modern colour scheme and design to match the couple’s overall style. 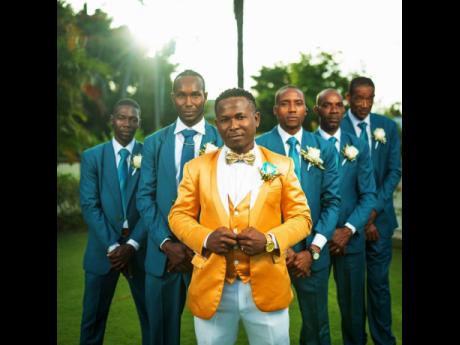 Contributed
Standing out in gold, the groom, Adrian Thomas (third left), was styled like a king on his wedding day, and is surrounded by his childhood friends (from left), Ikeyman Wilson; Best Man Calvin Morgan; Adrian Hewitt; Greg Dimitrius, and Winston McKenzie,who had to a part of his big day. 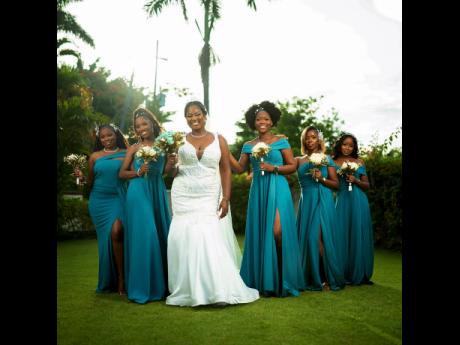 The third time’s the charm. That’s truly the prelude to Venetia Shepherd and Adrian Thomas’ story of adventure and love. The first chapter of their happily ever after as husband and wife began with “we do” during a romantic and elegant wedding held at the Caymanas Golf Club this past summer, but their story began far before.

A bus stop was where Venetia and Adrian met in 2014. Adrian, acting as his own Cupid, fired arrows, expecting to win over Venetia twice before she actually gave in on his third try and shared her telephone number.

“I would have noticed him a couple [of] times before as he beckoned to me for my number. It so happened that I gave in on his third attempt. He immediately texted me when I got home and then called. Initially, I wasn’t swooned over until it became daily conversations [which turned] into nighttime conversations until I couldn’t stop talking to him. He had (and still does) such a great sense of humour,” Venetia told Island Wedding.

She said there was no formality in their friendship transforming into a relationship. It was just a given after date nights became a norm, from dinners to movies and taking road trips that would lead to discoveries. Seven years later, Adrian got down on one knee while they were enjoying a quiet evening – though not the plan he originally wanted to execute – and Venetia said, “Yes!”

“It couldn’t have been any more perfect than to see him make that move in that moment. I literally thought that I am the luckiest girl ever because it meant I was going to be getting married to my ‘prince charming’,” she said. “I never second-guessed any moment I spent with him. He was naturally a winner in my eyes. I knew because I never had eyes for anyone else from the day I’ve met him until now. He has never lowered the standard of being good to me. He’s so fun to be around, and I absolutely love that about him because he always turns my frowns into smiles. He’s such a sweetheart and gentleman, always very loving, caring and protective of me.”

Adrian shared that she was the most intelligent woman he had met. “I thought to myself that this girl [is] so intelligent and speaks so well — she should be mine. I’d say since then, we’ve been inseparable,” he shared.

Venetia started wedding planning immediately after Adrian’s proposal – the very second after she began her research into the details – until she realised she could not do it alone. Karla Brackett of The Bridal Experience handled the planning from there on. The only thing that the couple had to do was show up. She made certain that every detail was on point, from thought to finish.

“Everything was well thought about, from where we were going to stay to what our invitations were gonna look like, to what we were going to eat on the morning of the wedding for breakfast because I never wanted any last-minute rushing. I wanted people to be excited when they saw the invitations, which were acrylic designed and delivered in gold boxes filled with teal filler paper and little sugar cookies. I also knew I wanted the atmosphere of the wedding to be simple but memorable and romantic.

Venetia stepped out on to the grassy aisle in a Chenele Wallace-designed ivory trumpet gown from Cochen Bridal. Adrian, who held a stately stance in his Mark Wisdom-designed tuxedo, could barely maintain his composure on seeing his bride.

“If I could go back to the wedding day, I would want to relive the ceremony. The atmosphere was so beautiful, and I could definitely feel the love pouring into me, and into us, from our close friends and family,” Adrian chimed in.

“My favourite part was when she was reading her vows, and she said that I held her hands and led her into the water and made her feel free as she is afraid of large bodies of water. I’ve compared our love story to the movie Titanic, or just the part where Jack helps Rose in the movie on to a wooden panel that was only strong enough for one person to save her life from the sinking ship as he faced the cold temperatures. I would do anything for my wife to make sure that she is always comfortable and protected, even if it means giving up my own safety. So this was special because it made me feel like I am doing something right by helping her through her fears, and she felt safe with me,” he continued.

The couple said they felt beyond loved on the “most memorable day of the season”, noting that while they have continued to share unforgettable moments since their first encounter at the bus stop, the wedding day goes down in the books.

“The wedding was everything we could imagine and more.” The dinner menu was a mixture of European and West Indian flavours.

The newlyweds honeymooned in Montego Bay at the Breathless Resorts but have dreams of flying to Paris, France, to take in the sights and sounds in the city of love.