Aims to become lawyer to assist the less fortunate 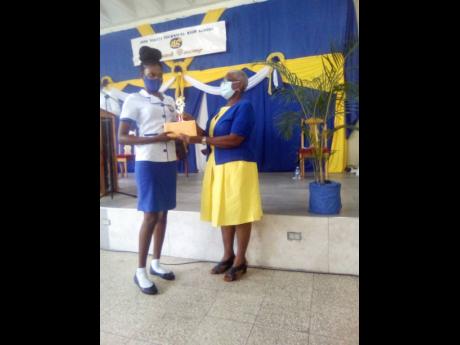 Rasbert Turner
Nickannebre Adman collects her award during the ceremony at the Jose Marti Technical High School in St Catherine on January 10.

Eighteen-year-old Nickannebre Adman was honoured as the most outstanding student for Unit One of the Caribbean Advanced Proficiency Examinations at Jose Marti Technical High School’s 45th awards ceremony.

Adman, who resides in Patrick City, St Andrew, is gearing up for the Unit Two exams and expressed delight after being awarded by the New York Chapter of the Jose Marti Past Students’ Association.

“It is an overwhelming feeling of encouragement to continue my pursuit to the next stage,” the aspiring lawyer said.

“I am so inspired, as I want to ably assist in the delivery of justice, especially to the less fortunate, so this trophy and contribution strengthen my resolve.”

The teenager had been in love with law as far back as her years at Progressive Basic School in Patrick City.

Adman was one of many teachers, students, and ancillary workers recognised at the January 10 function.

A sponsorship cheque of $1,343,000 was also gifted to the school for financing scholarships and mentorship programmes.

Ambassador-designate for the Republic of Cuba, Fermin Quinones Sanchez, said that he was overjoyed at the partnership.

The diplomat, who has been in Jamaica for three weeks, said it was the most meaningful contribution he could have made to start his tenure here.

“Jose Marti is a name that is revered in Cuba. In fact, he is a national hero, so having this institution named after him is awesome. It was the start of a great partnership of which I am honoured to be a part of, as education is the backbone of every modern society,” Quinones said.

Senior Superintendent of Police Clifford Chambers implored students to be fully committed to their education.

Chambers recounted that he was among the first batch of boarders at Jose Marti in 1987, when it became a high school.

He emphasised the need for discipline and commitment for each student to maximise their potential.

“When you wear the uniform, do so with pride,” Chambers said. “Don’t you ever stop applying yourself, as this is how you’ll achieve your full education. You are the future, but the work starts now.”

Chairperson for the 45th anniversary celebration, Andre Brown, said this year’s staging was a resounding success.

Jose Marti Technical High School was opened as a boarding school with 560 students.

The school was constructed under a partnership between the Jamaican and Cuban governments.