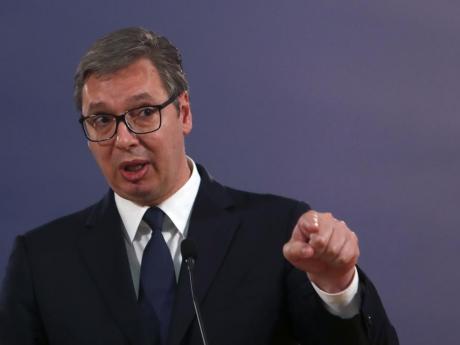 BELGRADE, Serbia (AP) — Serbia's president called for Novak Djokovic to return to his native country on Sunday hours after the top-ranked tennis player lost his court battle to play at the Australian Open and was deported.

He left Australia after saying he was “disappointed” with losing his appeal against deportation and adding that he needs “some time to rest and to recuperate” after the 11-day saga.

A masked Djokovic was photographed in an Melbourne airport lounge with two government officials in black uniforms.

He left on an Emirates flight to Dubai, the same transit point he used when he flew to Australia on January 6 after departing from Marbella, Spain.

Djokovic released a statement shortly after three Australian Federal Court judges unanimously upheld a decision made on Friday by the country's immigration minister to cancel the 34-year-old Serb's visa on public interest grounds because he is not vaccinated for COVID-19.

Djokovic's visa was initially cancelled on January 6 by a border official who decided he didn't qualify for a medical exemption from Australia's rules for unvaccinated visitors.

Djokovic was initially exempted from the tournament's vaccine rules because he had been infected with the virus within the previous six months.

In addition to his native Serbia, where he has an almost iconic status and overwhelming support, Djokovic could go to Marbella or Monaco where he has residences and where he has spent most of his time away from tennis.

He said he spoke to Djokovic on Sunday.

“We can't wait to see him in Serbia, to return to his country, to come where he is always welcome,” Vucic said.

“They think they humiliated Djokovic with this, the best player in the world, by the ten-day harassment, they humiliated themselves and Djokovic can return to his country with his head high up and look everyone in the eye.”

He did not say whether Djokovic confirmed he would go to Serbia after his deportation.

“We will be here to share the blows he received, to help him regain his energy, his faith in this sport, above all in fair play, which was completely absent.”