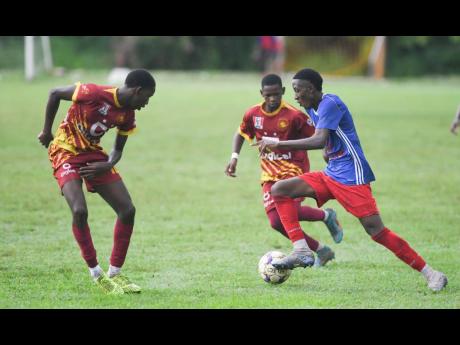 FOR THE last few games, Camperdown High School head coach Donovan Lofters saw signs of his team’s identity returning. The only missing element in his mind was fortune finally favouring him.

Yesterday, luck was finally on his side as his team held off Wolmer’s Boys’ School to register a 1-0 win in their ISSA/Digicel Manning Cup Group E game at the Alpha Institute.

Junior Grizzelle got the game’s only goal, putting Camperdown back in the race for a top-two spot in the 53rd minute, thanks to a deflected shot that rolled into the net, rooting Wolmer’s goalkeeper Roan Melford to the ground.

The game, which was played in wet conditions because of afternoon showers, was a battle of attrition, especially in the second half where Camperdown held off Wolmer’s late charge, notching a crucial win.

Lofters said that it required a complete effort from his team and every advantage he could get to change the trajectory of their season, even electing to change their playing kit.

“Our luck is changing. You realised I change the jersey today (yesterday) to blue. The blue jersey is my lucky jersey. So I needed everything. We were behind the eight ball. So we need every win that we can get,” Lofters said.

While Camperdown had their chances to extend their lead in the second half, Lofters was adamant about protecting their advantage. A critical component in their shutout, in his eyes, was the return of their captain and centre-back Daquan Brown, after suspension stemming from an incident in a 1-1 draw with Papine on September 16.

Lofters said that Brown invigorated the squad, especially with his presence in the backline after they got the all-important goal.

“(I saw) the fight and determination. We had a job to do and no matter what, as long as we can win. When we went up one, we decided, let’s protect this one. We needed the three points. (Brown) played like a true captain and we have missed him for two games. Now he is back and he is fighting hard. And the team strives from the captain and he is working as a captain,” Lofters said.

Wolmer’s, although they remain in second place with 12 points, they slumped to their second straight defeat of the season.

While not worried about their current position, head coach Jerome Waite said the team’s deficiencies in front of goal were a cause for concern.

“It’s always a thing that is haunting us and that is finishing in front of goal. And that is something that we have to take the time out and work and continue to work until these youngsters can get it right. But all is not lost,” Waite said.

“I think (Camperdown) wanted it more. It was a game that if they had lost today, then they can say goodbye to the competition.”

Camperdown are now in third place with eight points, four points behind Wolmer’s.